Evaluation of the antiamnesic effects of Phyllanthus amarus in mice

Alzheimer’s disease is a progressive neurodegenerative disorder characterized by a gradual decline in memory. Phyllanhus amarus is commonly known as bhumi amla in India and is traditionally used since centuries in ayurveda medicine. The present study was undertaken to investigate the effects of Phyllanhus amarus (PA) on cognitive functions and brain cholinesterase activity in mice. Elevated plus maze and passive avoidance paradigm were employed to evaluate learning and memory parameters. Three doses (50, 100 and 200 mg/kg, p.o.) of aqueous extract of PA were administered for 8 successive days to both young and aged mice. PA (50, 100 and 200 mg/kg) produced a dose-dependent improvement in memory scores of young and older mice. PA also reversed successfully the amnesia induced by scopolamine (0.4 mg/kg, i.p.) and diazepam (1 mg/kg, i.p.). Interestingly, brain acetyl cholinesterase activity was also reduced. The underlying mechanism of action for the observed nootropic effect may be attributed to pro-cholinergic activity exhibited by PA in the present study. Therefore, it would be worthwhile to explore the therapeutic potential of PA in the management of patients with cognitive disorders.

Phyllanthus amarus Linn. (PA) is an annual weed of the family of the Euphorbiaceae commonly known as bhumi amla in India and is traditionally used to treat flu, dropsy, diabetes, and jaundice. It is also used to treat hepatic and urolitic diseases and have diuretic, antiviral1, anticancer2,3, hepatoprotective4, antioxidant anti-inflammatory5 activity. PA mainly contains phyllnathin and hypophyllanthin as active ingredients6,7. The aqueous extract of PA had been employed for treatment of nervous debility, epilepsy, as medhya (intellect promoting) and in vata disorders. In the present study, the potential of antiamnesic effects ofPA was investigated.

Enhancement in the life-span of human beings in developed and developing countries has resulted in proportionate increase in the number of patients suffering from senile dementia. Alzheimer’s disease (AD) is said to be the leading cause of dementia in elderly individuals. AD individuals exhibit deterioration in mental functions rendering them incapacitated to perform normal daily activities. However, evidence shows that AD can also afflict young individuals as early as 40 years of age8,9. AD patients exhibit marked decline in cognitive functions and severe behavioral abnormalities such as irritability, aphasia, apraxia, agnosia and restlessness10,11. Neuritic plaques (consisting of a core of b-amyloid aggregates covered by dead neurons, microglia and apolipoprotein E) and neurofibrillary tangles are the major pathological lesions of an Alzheimer brain12. Since the allopathic system of medicine is yet to provide a radical cure for Alzheimer’s disease, it is worthwhile to explore the utility of traditional medicines. In the light of above, the present study was undertaken to investigate the influence of PAon memory of mice. The effects of PAon brain acetylcholinesterase activity were also studied.

Collection of the plant material. Leaves and stems of PALinn. were collected from Dehradun, Uttaranchal and were dried at 50°C. A voucher specimen of the plant was identified by taxonomists at botanical survey of India, Dehradun. The voucher specimen (HKJ/PA-23) has been kept at Department of Pharmaceutical Sciences, Guru Jambheshwar University, Hisar, Haryana, India.

Preparation of aqueous extract. Powdered PA (500 g) was extracted twice overnight with 2000 ml of distilled water at room temperature. The supernatant was collected and evaporated to dryness at 50°C under reduced pressure. The yield of the extract was 10.4% w/w.

Animals. All the experiments were carried out using male, Swiss Albino mice procured from the disease-free small animal house of CCS Haryana Agricultural University, Hisar (Haryana), India. Young (3-4 months old) mice weighing around 20 g and older (12-15 months old) mice weighing around 35 g were used in the present study. The animals had free access to food and water, and they were housed in a natural (12h each) light-dark cycle. Food given to mice consisted of wheat flour kneaded with water and mixed with a small amount of refined vegetable oil. The animals were acclimatized for at least 5 days to the laboratory conditions before behavioral experiments. Experiments were carried out between 0900 h and 1800 h. The experimental protocol was approved by the Institutional Animal Ethics Committee (IAEC) and the care of laboratory animals was taken as per the guidelines of CPCSEA, Ministry of Forests and Environment, Government of India.

Experimental protocol. In the present investigation, the mice were divided into 52 different groups comprising of 6 animals each for investigations using various interoceptive as well as exteroceptive memory models and for biochemical estimations. PA (50, 100 and 200 mg/kg, p.o.) was administered to young and older mice of different groups. These mice were exposed to the training session using elevated plus maze or passive avoidance apparatus on 8th day after 90 min of the last dose. Retention (memory) of the learned task was recorded after 24 hours i.e., on 9th day. Amnesia was induced in separate groups (interoceptive model) of young mice by scopolamine (0.4 mg/kg, i.p.) or diazepam (1 mg/kg, i.p.) on 8th day after 90 minutes of the last dose. Piracetam (200 mg/kg, i.p.), an established nootropic agent was injected for eight days to positive control group of animals. The whole brains were collected after 9 days of administration of PA.

Elevated plus-maze. Elevated plus-maze served as the exteroceptive behavioral model to evaluate memory in mice. The procedure, technique and end point for testing memory was followed as per the parameters described by the investigators working in the area of psychopharmacology13,14. The elevated plus maze for mice consisted of two open arms (16 cm x 5 cm) and two covered arms (16 cm x 5 cm x 12 cm) extended from a central platform (5 cm x 5 cm), and the maze was elevated to a height of 25 cm from the floor15. On the first day (i.e. 8th day of drug treatment), each mouse was placed at the end of an open arm, facing away from the central platform. Transfer latency (TL) was defined as the time (in seconds) taken by the animal to move from the open arm into one of the covered arms with all its four legs. TL was recorded on the first day (training session) for each animal. The mouse was allowed to explore the maze for another 2 min and then returned to its home cage. Retention of this learned-task (memory) was examined 24 h after the first day trial (i.e. 9th day, 24h after last dose). Significant reduction in TL value of retention indicated improvement in memory.

Passive avoidance paradigm. Passive Avoidance Behavior based on negative reinforcement was used to examine the long-term memory16,17. The apparatus consisted of a box (27 cm x 27 cm x 27 cm) having three walls of wood and one wall of Plexiglass, featuring a grid floor (made up of 3 mm stainless steel rods set 8 mm apart), with a wooden platform (10 cm x 7 cm x 1.7 cm) in the center of the grid floor. The box was illuminated with a 15 W bulb during the experimental period. Electric shock (20 V, A.C.) was delivered to the grid floor18. Training (i.e. 30th day of drug treatment) was carried out in two similar sessions. Each mouse was gently placed on the wooden platform set in the center of the grid floor. When the mouse stepped-down placing all its paws on the grid floor, shocks were delivered for 15 seconds and the step-down latency (SDL) was recorded. SDL was defined as the time (in seconds) taken by the mouse to step down from the wooden platform to grid floor with all its paws on the grid floor. Animals showing SDL in the range of 2-15 seconds during the first test were used for the second session and the retention test. The second-session was carried out 90 min after the first test. During second session, if the animals stepped down before 60 seconds, electric shocks were delivered once again for 15 seconds. During the second test, animals were removed from shock free zone, if they did not step down for a period of 60 seconds and were subjected to retention test. Retention (memory) was tested after 24 h (i.e. 9th day, 24h after last dose) in a similar manner, except that the electric shocks were not applied to the grid floor observing an upper cut-off time of 300 seconds19,20. Significant increase in SDL value indicated improvement in memory.

Collection of brain samples. The animals were sacrificed by cervical decapitation under light anesthesia on the 8th day, 90 mins after administration of the last dose of PA. Immediately after decapitation whole brain was carefully removed from the skull. For preparation of brain homogenate, the fresh whole brain was weighed and transferred to a glass homogenizer and homogenized in an ice bath after adding 10 volumes of 0.9% w/v sodium chloride solution. The homogenate was centrifuged at 3000 rpm for 10 min and the resultant cloudy supernatant liquid was used for estimation of brain acetylcholinesterase activity.

Estimation of brain cholinesterase. Brain cholinesterase activity was measured by the method of Ellman et al with a slight modification21,22. 0.5 ml of the cloudy supernatant liquid was pipetted out into 25 ml volumetric flask and dilution was made with a freshly prepared DTNB (5.5-dithiobis-2-nitrobenzoic acid) solution (10 mg DTNB in 100 ml of Sorenson phosphate buffer, pH 8.0). From the volumetric flask, two 4 ml portions were pipetted out into two test tubes. Into one of the test tubes, 2 drops of eserine solution was added. 1 ml of substrate solution (75 mg of acetylcholine iodide per 50 ml of distilled water) was pipetted out into both the tubes and incubated for 10 min at 30°C. The solution in the tube containing eserine was used for zeroing the colorimeter. The resulting yellow color is due to reduction of DTNB by certain substances in the brain homogenate and due to non-enzymatic hydrolysis of substrate. After having calibrated the instrument, change in absorbance per min of the sample was read at 420 nm23. 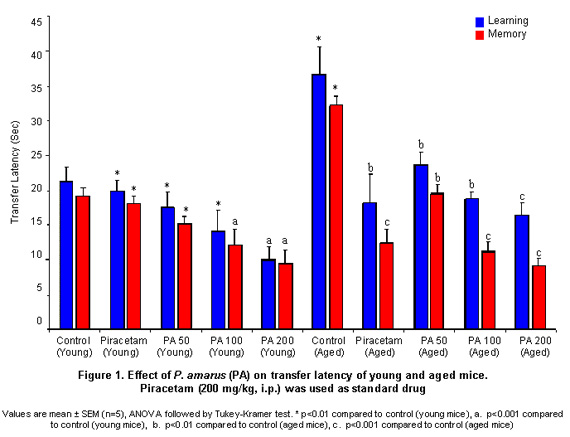 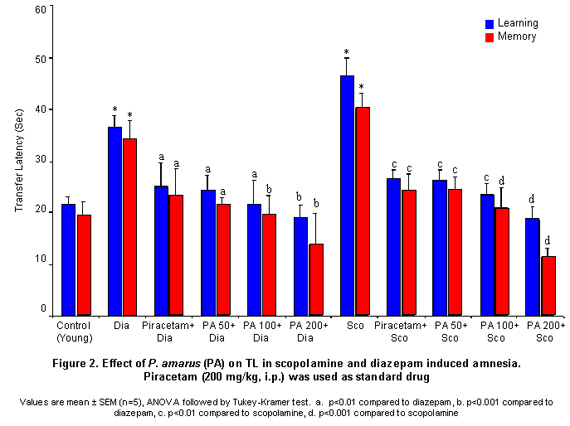 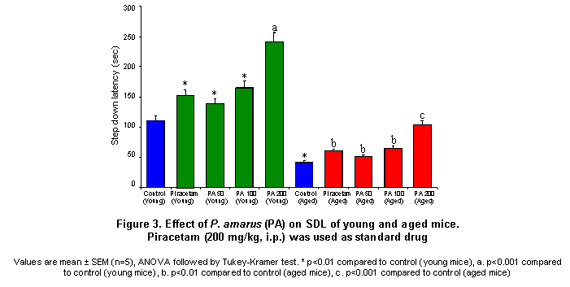 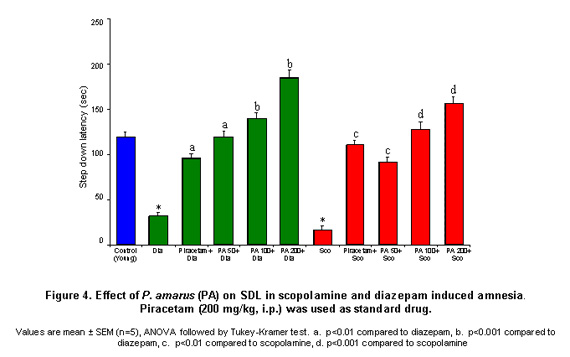 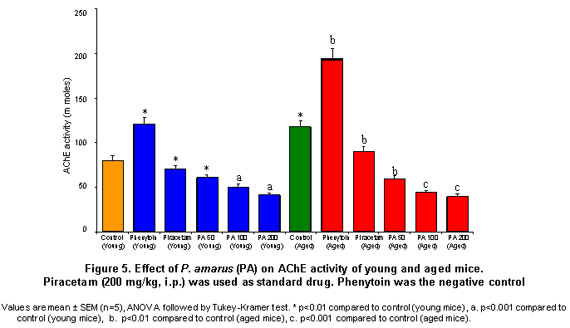 There has been a steady rise in the number of patients suffering from Alzheimer’s disease (AD) all over the world. AD is a genetically heterogeneous neurodegenerative disorder, which is slow in onset but relentless in progress24. There are around 35 million patients suffering from AD all over the world, out of which United States of America alone has around 4.5 million patients25. Despite the severity and high prevalence of this disease, allopathic system of medicine is yet to provide a satisfactory antidote. Therefore, neurobiologists all over the world are looking for new directions and alternative strategies for managing this disease of senior citizens. In India AD patents are estimated to be less than 3.5 million26. These prevalence figures however, point out that the numbers of patients suffering from AD are considerably small in India when compared to USA. Therefore, the authors were motivated to explore the potential of certain nutrients from Indian dishes responsible for this protection against AD. In the present study, P. amarus administered for 8 days improved the memory of mice as reflected by diminished TL and enhanced SDL values as compared to control animals. Furthermore, pretreatment with PA for 8 days protected the animals from memory deficits produced by scopolamine and diazepam. These findings suggest the possible neuroprotective role for PA.

Acetylcholine is considered as the most important neurotransmitter involved in the regulation of cognitive functions. There is extensive evidence linking the central cholinergic system to memory27-29. Cognitive dysfunction has been shown to be associated with reduced cholinergic transmission and the facilitation of central cholinergic transmission with improved memory30. Selective loss of cholinergic neurons and decrease in cholinacetyltransferase activity was reported to be a characteristic feature of senile dementia of the Alzheimer’s type31. Other research findings using Glycyrrhiza glabra, Myristica fragrance and Zingiber officinale have displayed a link between memory improving effect and cholinesterase inhibition32. In the present study, the PA when administered for 9 days to young and older mice showed significant reduction of brain acetylcholinesterase activity thereby probably facilitating cholinergic transmission and improving memory of animals.

In the present study, it was observed that PA inhibited brain acetylcholinesterase enzyme, thereby elevating acetylcholine concentration in brain homogenate and ultimately improved memory of both young and older mice. Hence, a combination of neuroprotective, anticholinesterase and nootropic effects exhibited by PA may all be eventually responsible for the memory improving effect observed in the present study. Therefore, it would be worthwhile to explore the therapeutic potential of P. amarus in the management of Alzheimer patients.