Preeclampsia is the first cause of maternal morbidity, mortality and intrauterine growth restriction (IUGR)1. In developing countries, a high proportion of the pregnant women have IUGR associated with unexplained medical factors1. Slight elevation of blood pressure, although within clinical normotensive range, can alter uterine and placental perfusion and influence fetal growth2. A high calcium diet enhances vasodilation and reduces blood pressure in experimental hypertension3,4 with suppresion of the parathyroid hypertensive factor5. A low calcium diet enhances vasoconstriction and increases PTH and coronary artery disease6. Low calcium intake increases the incidence of eclampsia and the supplementation in high risk pregnant women can reduce preeclampsia complications7. In non-pregnant women high levels of serum PTH were associated with markedlly increased blood pressure8. Jesspersen et al.9 suggested a role of serum PTH on the regulation of blood pressure in pregnant women. Jorde et al.2 reported an association between low calcium intake, parathyroid hormone, and blood pressure during pregnancy. The association between calcium intake, calciotropic hormones and blood pressure during the pregnancy, birth and puerperium is not well studied. In an attemp to corroborate and to extend conclusions from previous studies2 results from a prospective study of the blood pressure levels during pregnancy, birth, and puerperium as well as the relationship with calcium intake from diet, calciotropic hormones and vasoactive regulators for gaining a better understanding of the pathophysiologic mechanisms are here reported.

A prospective study was performed from 15 weeks of gestational age to puerperium period (at least 48 hours). All Spanish healthy primigravid women during 2005-2006 were screened and recruited in the Hospital Universitario Príncipe de Asturias (Alcalá de Henares, Madrid, España). Inclusion criteria (healthy primigravida, single pregnancy, first prenatal visit at 15 weeks of gestational age) and exclusion criteria (diastolic blood pressure of 85 mm Hg or more at the antenatal visit, personal history of hypertension, cardiovascular or renal disease) were verified by a member of the research team. The gestational age was determined according to the date of the last menstrual period if the woman had a regular (26-31) day cycle; otherwise an ultrasound evaluation for the gestational age was performed. The Institutional Human Ethical Committee approved this survey. Eligible women who agreed to participate in the study received verbal information about the research and were requested to sign written informed consent forms.

The calcium nutritional inventory was performed by recording the last week’s diet as recomended by WHO13. During 24 hours before the laboratory tests the diet was free of nitrite and nitrate. All clinical and laboratory tests were repeated at 28 weks of gestational age. Blood pressure was verified with a standardized mercurial sphygmomanometer at each prenatal visit (phase V Korotoff method=diastolic pressure).

The mean values of two consecutive measurements were used for analysis. At 28 weeks of gestational age, blood pressure measurements were obtained via blood pressure Holter test using the Mobil-o-Graph ABP Control Numbed Cardiac Diagnostics (Sheffield, UK) and was interpreted based on the MAPA technique (WHO standardized method with reduced intra-assay variability)14 by a blind independent researcher from the Nephrology unit (Hospital Universitario Príncipe de Asturias). All of the patients were followed up and received the standard antenatal visits every month until the 36th week of gestation and twice a month thereafter. Maternal and neonatal complications were evaluated.

The sample size was calculated by convenience as a pilot study to get a better understanding of physiologic mechanisms between blood pressure levels, calcium intake and vasoactive mediators. Means are presented with their standard deviation.

Multivariate regression models were performed to control for potential confusion. Correlation coefficients and their 95% confidence intervals were calculated by using SPSS for Windows statistical package (version 11.5). A p<0.05 was regarded as statistically significant.

A total of 174 healthy primigravid women at 15 weeks of gestational age were screened in two hospital outpatient clinics. Among the screened women, 9 (5.1%) were excluded for maternal pathology. A total of 16 (9.6%) patients were lost to follow-up and were excluded from analysis. The final analysis was based on 149 women. 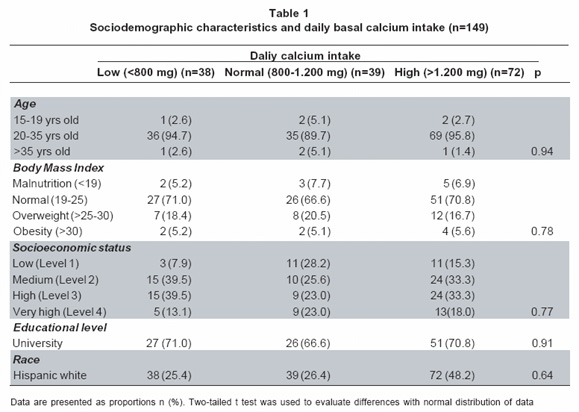 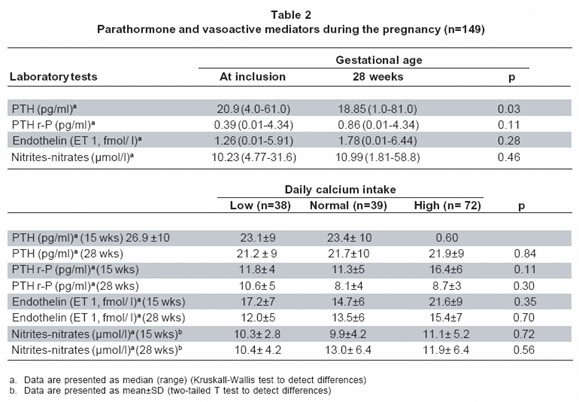 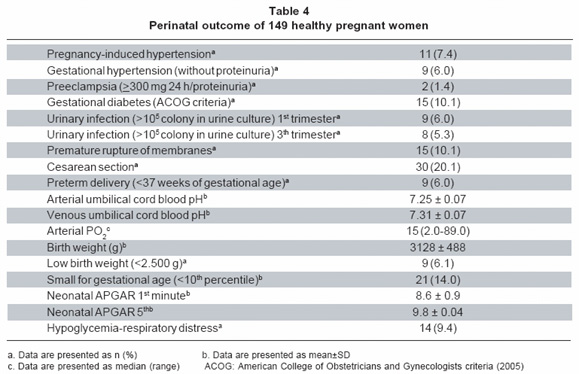 The women included in this prospective study were healthy pregnant women confirmed by clinical parameters, laboratory tests and 24-hour blood pressure Holter Test. To maintain homogeneity of the sample and control for potential biases, women with extreme reproductive age, multiple pregnancy, and borderline high blood pressure, cardiovascular and renal disease were excluded from the study. 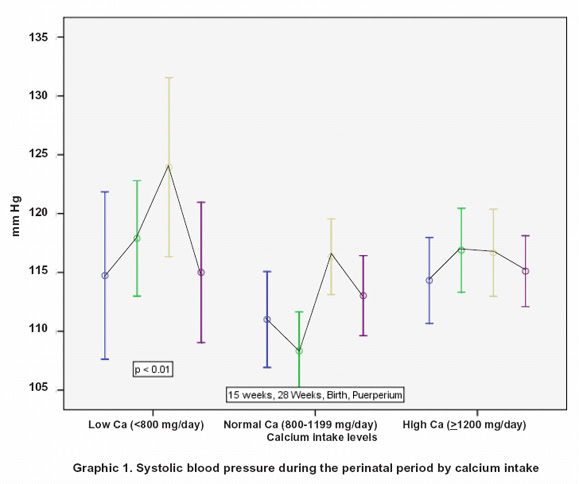 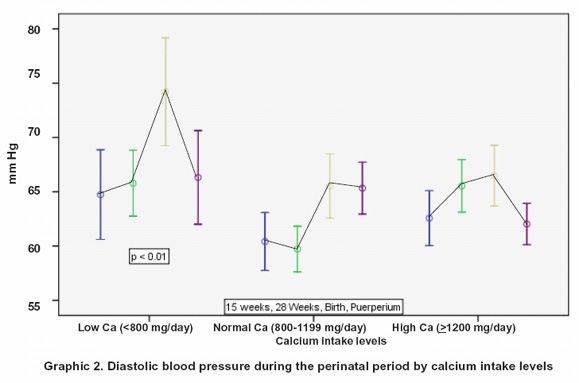 During pregnancy, there is a great demand for calcium intake to respond to the higher demands caused by the process of fetal bone formation. Furthermore, there is a dilution of the cation due to the expansion of the extracellular fluid volume, and to the normal hypercalciuria of pregnancy, consequent to increased glomerular filtration. Thus, serum-ionized calcium concentrations depend on adequate calcium intake7. In this study, calcium nutrient intake, was initially normal and increased during pregnancy according to nutritional habits of women in developed countries. Calcium homeostasis appears to be attained by more efficient intestinal calcium absorption during pregnancy and by renal conservation. PTH seems to play major roles in the adjustment of calcium metabolism15. In this study calcium intake was positively correlated to plasma calcium levels indicating that calcium from diet was well absorbed and the creatinine clearance was normal indicating a good renal function. The lack of association between calcium intake and blood pressure in the second trimester was observed in all recruited pregnant women probably associated with good calcium intake observed in 74.6% of the recruited pregnant women.

At inclusion there were no differences between calcium intake and PTH levels. During the second trimester calcium intake increased with subsequent decrease of PTH, 24 hours calciuria and blood pressure. Calcium is crucial for the production of endothelial vasodilators like prostacyclin and nitric oxide8,16. In addition, preeclamptic patients have low levels of serum-ionized calcium and abnormal levels of calciotropic hormones8. In this study PTH levels in pregnant women who further developed pregnancy-induced hypertension were high in comparison with women who remained normotensive (p=0.01) as was described before5. This result is consistent with the hypothesis that the PTH is a mediator between the calcium intake and the hypertensive disorders of pregnancy7. A high calcium diet enhances vasodilation and reduces blood pressure3,4 by suppresion of the parathyroid hypertensive factor5 in contrast a low calcium diet enhances vasoconstriction and increases PTH7 as was confirmed in this study. In this study the only assessed vasoactive mediator associated with blood pressure levels and calcium intake was PTH, endothelin and nitric oxide production remained normal.

The incidence of smoke habit and IUGR was high (Table 4). This habit has been associated to IUGR and to low birth weight as confirmed in this and other studies17. Recent studies have shown that pregnant women destined to develop preeclampsia have early endothelial dysfunction with higher blood pressure levels, although within clinical normotensive range18. When PTH levels are persistently high5, women have high systolic and diastolic blood pressure. In this study, after adjusting for confounding factors, low calcium intake was associated to high PTH levels and large increase of systolic blood pressure during pregnancy. Slightly high levels of blood pressure can alter uterine and placental perfusion and determine fetal growth restriction2, a serious condition with implications on the health of newborns19. Further large clinical studies are needed to test the clinical implications of the results of this prospective study.

The authors have no personal or financial conflict of interest related to this project. Contribution of authorship everyone of 6 authors has collaborated in this study in design (a, c, d, and e) recruitment and follows up of patients (a), recollection and laboratory test analyses (e), re-analyses of data and paper construction (b).