The main cause of maternal mortality in Colombia is preeclampsia; even though it is a major public health problem its etiology and physiopathology remain unknown. However it is believed that endothelial dysfunction plays a central role in the development of this disease. Many clinical trials have been carried out to demonstrate the effect of certain interventions to prevent preeclampsia and improve pregnancy outcomes. Our hypothesis is that the reduction of preeclampsia risk could be achieved through an appropriate health system that would provide an opportune and effective prenatal care to pregnant women allowing early diagnosis and treatment of frequent nutritional and health related problems.

The main cause of maternal mortality in Colombia is preeclampsia (PE). It causes 42% of the maternal demises and increases the perinatal mortality by five fold. It is even a bigger problem if it is considered that maternal mortality in Colombia is ten times higher than in United States of America1. In spite of its impact on public health PE's aetiology and physiopathology remain unknown. In this paper it is postulated that PE is a disorder due to multiple causes, and that nutritional, socioeconomic, genetic and environmental factors might lead to an endothelial function alteration characterized by a modification in the production of vasoactive substances, especially nitric oxide (NO), prostacyclin, and pro oxidizing free radicals2. Furthermore, this article proposes that the weight of these risks factors varies depending on the level of socioeconomic development reached by a given society3.

Relevant epidemiological observations to prevent PE. PE complicates about 6% to 8% of pregnancies; however, noticeable regional differences exist in its incidence due to the greater presence of certain risk factors in developing societies4. Nutritional factors like the low intake of calcium1, antioxidizing vitamins5 and essential fatty acids6 are considered elements contributing to an increasing risk of developing PE. In addition, the findings of a large scale population study carried out in Colombia led the present authors to propose that chronic subclinical infections are the main risk factor for PE in this country7, proposal which it has been recently supported by demonstrating that inflammation associated to oral, vaginal, and urinary infections precedes the PE development8,9. These observations are important since they have served as a support for the realization of studies directed to prevent the disease.

PE preventing strategies. The lack of an adequate knowledge of PE's physiopathology has determined that many of the strategies used to prevent it are based on observational or anecdotic facts or in studies performed with women at high risk of developing the disease. Many non pharmacological strategies have been used to prevent PE, especially those related with nutritional restrictions or nutritional supplements, and rest in bed10,11. In the next section those in which greater evidences of a beneficial effect exists will be reviewed.

Villar and the clinical trial group of calcium supplementation for the prevention of PE of the World Health Organization (WHO)16, included 8,325 women with a low intake of calcium (less than 600 mg per day) and less than 20 weeks pregnant; of them, 4,157 received 1.5 g of calcium per day and 4,168 received placebo. This calcium supplementation was associated with a small non statistically significant reduction of PE (4.1% vs. 4.5%). However, severe pregnancy-induced hypertension (RR 0.71, 95% CI: 0.61-0.62) and eclampsia (RR 0.68, 95% CI: 0.48-0.97) were significantly lower in the supplemented group. Besides, a reduction in the rate of complications of severe PE was observed (RR 0.76, with a 95% CI: 0.66-0.89). Severe maternal morbidity and the mortality rate (RR 0.80, 95% CI: 0.70-0.91), and neonatal mortality rate (RR 0.70, 95% CI: 0.56-0.88) were also significantly lower in the calcium supplemented group. This important clinical trial realized in a low calcium intake population demonstrated that although 1.5 g of calcium supplementation per day did not statistically diminish the total incidence of PE, it significantly diminished the risk of the most serious PE complications, including maternal death, preterm birth and maternal and neonatal morbidity. Based on these results, the authors analyzed the practical implications of calcium supplementation in population with a low intake of this mineral and concluded that 125 women should be treated to prevent a severe complication of PE, and 167 should be treated to prevent a very premature preterm birth. These numbers are reduced to 45 and 71, respectively if the pregnant women are less than 20 years old. Finally, they assure that it would be necessary to supplement 100 women to prevent severe maternal morbidity and one death event, and that it would be necessary that 250 pregnant women receive calcium supplementation to prevent one neonatal death. The WHO group affirms that «acute and long term consequences of these poor outcomes; combined with the socioeconomic limitations justified the calcium supplementation».

Recently, Hofmeyr et al.17 proposed that the investigation about this subject should be redirected from clinical trials to communitarian interventions with calcium supplementation. This proposal, consistent with López-Jaramillo & de Félix's18, considers calcium supplementation as a preventive nutritional measure directed at overcoming a socioeconomic problem, which frequently impedes the access to dairy products to poor women in Colombian society during their pregnancy, and that it should not be prescribed to women with an adequate consumption of the mineral. Pregnancy is a period during which women need an extra calcium consumption to guarantee a positive balance of the mineral to compensate the great demand of calcium necessary for fetal bone mineralization19.

On the other hand, the results of a clinical trial including 2,951 pregnant women were recently published21 demonstrating that multivitamins and folic acid supplementation were associated with an increase in serum folate, a decrease of plasmatic homocysteine and a risk reduction of PE (RR 0.37, 95% CI: 0.18-0.75).

More studies are necessary to confirm this persuasive interaction in view of the proposal that a change in the oxidant/antioxidant balance is one of the mechanisms leading to an endothelial function alteration which characterizes PE22. Since many serious and well designed clinical trials are being carried out, we should wait for their results before recommending the routine use of antioxidant vitamin supplements during pregnancy to prevent PE.

Low aspirin doses. A recent review of the Cochrane library23 examined the results of 59 clinical trials which included 37,560 pregnant women and that were directed to evaluate the effectiveness and safety of low aspirin doses to diminish the risk of developing PE. A reduction of 17% in the risk of PE associated with the use of antiplatelets doses was observed [(46 clinical trials, 32,891 women, RR 0.83, 95% CI: 0.77-0.89), number needed to treat (NNT) 72 (52,119)]. Despite the fact that there were no statistical differences in the RR based on maternal risk, a significant increase in the reduction of the absolute risk of developing PE was observed in women at high risk compared with those at moderate risk. The authors concluded that the administration of low aspirin doses has moderate benefits in the prevention of PE and proposed that more information is necessary to determine which women can benefit from this intervention, when the treatment should be initiated, and which dose must be used. From a practical point of view, the authors leave the decision of its use to both the pregnant woman and her doctor. Since it is a small reduction in the risk of developing PE, a large number of women need to be treated to prevent only one adverse outcome, which seems little practical, although even this small reduction could be useful from a public health perspective.

Treatment of vaginal, periodontal and urinary infections. Some studies have shown that urinary and vaginal infections can cause PE7,24-26. Furthermore, it is well known that the incidence of asymptomatic bacteriuria is three times higher in women with PE, and that urinary infection is a strong risk factor for PE25,26. Recently Herrera et al.9 demonstrated an association between PE, C-reactive protein concentration and periodontitis.

Many studies have shown that the identification and treatment of bacterial vaginosis and urinary infection reduces the presentation of preterm delivery, and premature rupture of fetal membranes27,28, and Herrera et al.7 demonstrated in Colombian women that early detection (14-20 weeks of gestational age) and opportune treatment of vaginal and urinary infections reduced the incidence of PE by 64.7%.

Since the realization of double blind, placebo-controlled clinical trials to evaluate the effect of the treatment of subclinical infection are not ethically acceptable, community work evaluating the impact of early diagnoses of subclinical infections and their adequate treatment is an urgent need in countries where vaginal, oral, and urinary infections can affect up to 50% of the expectant mothers. Besides, it has been demonstrated that low grade inflammation associated to endothelial dysfunction, precedes the clinical manifestation of PE, and that the treatment of infections recovers the endothelial function8,29.

It has been reported that the use of diuretics does not have any effect on PE prevention or its complications30, and that their use is not recommended considering the high levels of adverse events found a recent metaanalysis (1,836 women). Regarding the use of exogenous donors of NO or of the substratum for its synthesis (L-arginine) to prevent PE, the metaanalysis31 of six clinical trials that included 310 women showed that the data available are insufficient to reach appropriate conclusions about whether exogenous donors of NO or its substratum are useful to prevent PE.

The hypothesis can be summarized as follows: preeclampsia is the result of a combination of economical, psychological, social, nutritional, environmental and genetic factors that culminate in an alteration in the production of the free radicals NO, O2- and ONOO-. The specific weight of each factor differs between developed and developing countries2. Poor women from developing countries like Colombia and Ecuador are the most exposed to these risk factors, which explains the high incidence of the disease, converting it into the main cause of maternal mortality.

We have proposed an integral model which pretends to include and relate the different factors that could participate in the reduction of PE incidence in our countries (Figure 1). The right interpretation of this model allows us to understand that the most economical, effective and universal way to prevent PE is a social system that guarantees an adequate nutrition of the pregnant women and the access to an adequate system of prenatal care which would include the administration of prenatal tablets containing among other components vitamins C and E and minerals such as calcium, which would compensate for the extra demand of nutrients that are taken from the mother by the foetus for its organic development. Moreover, an adequate prenatal control not only allows the diagnosis and early treatment of subclinical urinary, oral and vaginal infections, but also the identification and correction of bad nutritional practices that are expressed in an excessive weight gain and biochemical alterations of the lipid profile and carbohydrates. In populations with marked deficiencies of some nutrients, as it is the case of calcium in Latin-American women, or antioxidant vitamins in Caucasian women, the administration of these supplements is necessary. 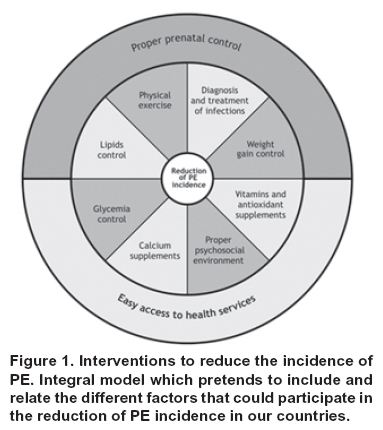